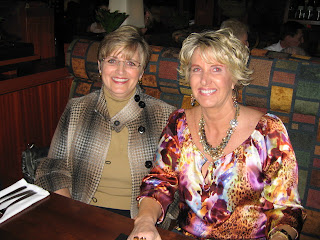 My clients of the month this month are Sally & Shelley!  I picked them as a pair to be client of the month this month because they are quite the Pilates dynamo team together.  They do a duet (or semi-private session) twice a week every week and are extremely dedicated, which is why I am naming them Clients of the Month for January.  (Shelley also loves to do our energetic Piloxing class as well).

Shelley started here a few months before Sally, and actually started coming to Indianapolis Pilates by 15 to Fit because one day she was just driving by and saw our sign.  She said she took it as a “sign” so to speak that she should give it a try.  Shelley and Sally have been friends for close to 15 years and one night, while enjoying some tasty margaritas together, Shelley told Sally about it and Sally decided she wanted to give it a try together—particularly when they figured out they could start doing a semi-private session together (nothing like setting exercise goals over a drink right?).  So they started working out together In September 2010 and have been here ever since.
When I spoke with them, they said some of the things they like about Pilates in general is that no matter what you do, you always seem to get a good, and varied, workout.  They also like that, as they said, “the routine is never routine.”  They like that every session is different.  Shelley says it is the only exercise regime she has every stuck with (and she has tried them all).  She likes the variety and the fun and camaraderie of working out with a friend, and with trainers she really likes.
They both commented on the social climate at the studio as one of the things they like about Indianapolis Pilates by 15 to Fit specifically.  They like not only the friendship they share personally, but also the friendliness and mix of people they have met at the studio, both students and trainers.  I think one of them said it like this, “the studio has a good personality.”  I love hearing things like that because one of my goals is to have clients feel like the place where they exercise is also a place where they can have fun. Shelley, who, as I said has had a hard time sticking to any exercise program said that if it wasn’t for the people here, she might have already quit.  She talked about how when she has joined gyms in the past and just never felt like she made any personal connections with anyone other than sharing sweat on the machines (which by the way, was another thing she mentioned—the fact that we always sanitize each machine between each new user).
They both told me that they also feel like the trainers at 15 to Fit make a big difference for them.  Sally said she has been trained by several of our trainers and they have all given her great workouts.  Shelley mentioned how she liked how well informed and well trained our instructors are.  And I take great pride in that, as all of our instructors have gone through several Pilates trainings and constantly continue to upgrade their knowledge with new classes and trainings.
Both Sally and Shelley had obvious goals when they started Pilates and they are both happy to say that their overall health and fitness is generally increased.  Sally talked specifically about losing inches from her body and Shelley said that her plantar fasciitis has disappeared since she started doing Pilates.    We love hearing success stories like this, and we love Sally and Shelley! Congratulations ladies for being our January clients of the month!
patrea2012-01-13T17:08:00-05:00