Pilates Breathing and ‘The Hundred’

I am so fortunate to have been taught by Mary Pilates, niece of Joseph Pilates. Mary was very emphatic about breathing as one of the fundamentals of the Pilates Method. I recorded Mary speaking and one of first things she said was, “You have to teach them how to breathe. It’s not easy and most of them don’t know how to breathe right anyway, or they hold their breath and don’t do it at all.”

According to Mary, the way you begin a Pilates session is to do “The Hundred” because this is your warm-up, and nothing else is needed. Not only does it involve breathing, it involves the entire body and mind. I must admit that I got a strict reprimand from Mary early on in my studies with her. “You don’t tell them to close their eyes and relax their shoulders and stretch different body parts, while they breathe deeply and let go of their troubles,” said Mary. She was right. “The Hundred” is not easy and simple. “Starting any other way makes you too tired to execute the full 100 breaths, especially when you are raising and lowering your arms in a 6-inch to 8-inch range.”

Much like her Uncle Joe, Mary was a very gruff and a hands-on teacher. Mary said, “If you could feel the movement done correctly at least once, you could memorize this feeling and work on repeating it and perfecting it.” This is how she taught Pilates breathing and how it applies to “The Hundred.”

She would have you sit on the mat, knees bent, feet flat to the mat, arms wrapped loosely around your shins, chin pressed tightly against the chest, abdominals scooped in as much as possible with a roundness to the base of the spine.

She would kneel behind you and spread the fingers of both her hands on your back ribcage and have you breathe in as deeply as possible and hold the breath in there (for what felt like an extremely long, uncomfortable couple of seconds) as she pressed her fingertips into your back. Once she started to lighten the pressure of her fingertips, it was your signal to begin to exhale as she flattened her palms on your back and began to draw her fingers toward one another and you exhaled the air out of your lungs fully as she flattened her palms with a bit of pressure and held you there until every drop of stale and toxic air was released.

You could really feel the breath by the way she guided you physically with her hands and fingertips. She would stretch and extend and separate her fingers as you breathed in as much air as possible. It felt like two big balloons were inside you as your ribs separated. She purposely hesitated and held the pressure of her fingertips there. She then gently released the pressure of her fingertips and flattened her fingers. Then she brought her fingers closer and closer to one another until her fingers touched and she pressed down with her connected fingers and her flat palms. She once again hesitated and held her flat palms there after you exhaled and you felt that same discomfort brought on by not having the ability to expel a single drop of air from your lungs. At this point, you could barely feel the two tiny, flat and empty balloons inside your rib cage. It was the most amazing feeling of being so full of oxygen that you could burst, with no more oxygen able to be taken in and conversely, when you exhaled, not an additional or single drop of air could be expelled from your lungs. You would feel completely empty.

Breathing was taught to be a horizontal movement of opening and widening the posterior ribcage. Of note, the shoulders would remain relaxed and flow with rest of the movement. No air went to your abdominals. Your breathing would come from your lungs. The placement of the bent legs, meaning the upper body was resting on your thighs helped ensure that no air would go to the abdominals.

“The Hundred is never easy or boring,” explained Mary. “You can always reach your fingertips a little longer, and your toes too, locking out your knuckles, wrists and elbows and your toes, ankles and knees. You can always drop the crown of your head more toward the center of the body and feel an increase in the weight that it has. You can try to peel more of your shoulders off the mat, coming more forward with your upper torso by sliding your rib cage diagonally into your waist.” 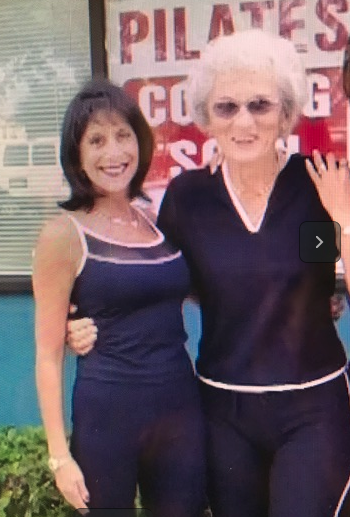 Again, quoting Mary, “There is a strong tendency to breathe in too much air and too quickly in the beginning of The Hundred. Try to relax and breathe in the air slowly and not as vigorously in the very beginning. You will tire and it will be more difficult for you to complete 100 breaths. You want the quantity and quality of your breaths to be the same at set two (20) breaths as it is in set 8 (80) breaths.”

Mary was most vehement about lifting your legs two inches off the mat for The Hundred. She said, “If you can only do 10 breaths (5 breaths in and 5 breaths out,) then that was all you did that day. According to the way she was taught by her Uncle Joe, there were no modifications for leg positioning as we see it today. Uncle Joe said, “If that’s all you could do that day, you come back the next time and try for 20 breaths.”

Uncle Joe said, “Oxygen is the antidote, like medicine given to treat a poison. When we breathe fully and deeply like this, we bring blood flow to all the muscle fibers, vital tissues and organs in the body and rid it of toxins. Breathing is an internal shower, a bodily house-cleaning with blood circulation. Doing The Hundred even boosts your metabolism without unnecessary pounding or throbbing of your heart. Breathing is the first act of life, and the last. Our very life depends on it.”

Glaucia Adriana and The Voll Pilates Group interviewed me for their filming of the documentary, “Tribute to Joseph Pilates.” They asked, “Out of all the well-known quotes that Joseph H. Pilates had, which is your favorite?” My eyes started to tear up a bit as I started listing to them to myself and I was filled with so much passionate emotion. After a moment of hesitation, I collected myself and replied, “Above all, learn how to breathe correctly.”

In Return to Life Through Contrology, he wrote:

The impact of so much oxygen upon your bloodstream may at first quite naturally and normally result in your experience of light-headedness similar to the effect you might experience where you for the first time find yourself actively engaged in the rarefied atmosphere high up in the mountains. However, after a few days this feeling will entirely disappear.

When the world around me doesn’t make sense and there are bombings, shootings, political unrest and so much more negativity going on, the only way I can get through it is by breathing, the natural tranquility given to me by an internal shower.

Francene Perel is recently most known for studying with, and being certified by Mary Pilates, niece of Joseph H. Pilates. Joseph H. Pilates wanted Mary to be an extension of him and preserve his teaching techniques of original instruction. Mary has passed her uncle’s legacy on to another generation, and has taught an elite few instructors, one being Francene Perel. Francene was the fitness director of several fitness facilities and taught Pilates. She was originally certified in the Stott/Contemporary method when a mutual friend introduced her to Mary. Francene continued to study with Mary and decided to hang up her aerobic shoes for good. Francene Perel saw the results in her own body and was amazed at how Mary was able to move at 82 years of age. Francene realized that Pilates was not a last name or a form of exercise; it was a lifestyle! Francene devoted all her energies to full time instruction in Pilates. She helped Mary to obtain the United States of America Trademark Registration for Original Pilates®. Recently, Francene was featured in the documentary movie, a Tribute to Joseph Pilates.

Francene Perel holds a BA and MA in Spanish and a second MA in Psychological Services from the University of Pennsylvania. This unique combination has given Francene the ability to teach Pilates in Spanish and have an in-depth ability to understand her clients’ personalities.

Thanks for reading and have a great workout!