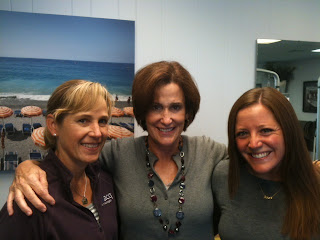 Annie, Courtney, and Libby have been working out as a team here at Indianapolis Pilates by 15 to Fit since April—and while that may not be the longest of many of my clients, the fact that they are so dedicated and consistent is one of the reasons they impress me so much.  Annie and Libby had done Pilates elsewhere before, but when Annie saw my sign one day just driving by, she decided to get Libby to give it a try with her.  Shortly after that, Courtney joined them.  These three ladies all work together and are friends outside of the studio—so they have a great time talking and laughing (and working out of course) with our trainer Georgeanna.  They work out twice a week over their lunch hour.
Courtney mentioned how she enjoyed working out over her lunch hour because it breaks up her day a bit and gets her out of the office.  They all really enjoy the flexible scheduling they can have here at the studio.  As far as the studio goes, they mentioned some of their favorite things—first, they love Georgeanna (or “G” as they call her) who is their regular trainer.  They really enjoy working out with her and I have seen first-hand the camaraderie they all seem to share.  They told me they also like the facility and the ability to be able to do a triplet on the equipment, as not a lot of studios have as many reformers set up as we do.
As far as their individual needs, they like that while they are different ages, and at different exercise levels, that they can still get the perfect workout for their individual bodies. They like that the exercises are adaptable to their various needs and strength levels. And they have gotten so comfortable with the machines and the workouts, Georgeanna tells me they are practically experts at knowing all the names of exercises and what spring level to set the machines.
They all had goals to get stronger and leaner when they began with us.  Courtney says people began complimenting her right away. She also felt an immediate connection with Pilates (which she had not tried before).  She felt like it was the right type of exercise for her because while it made her stronger, it also respected her body and didn’t cause the kind of pain or fear of injury that other harsher types of programs sometimes do.  Libby mentioned that she really enjoys the mind-body connection of Pilates. Annie felt like she is meeting her goals of getting stronger and leaner and has enjoyed the fact that people have been asking her what she is doing because they have noticed a change in her.  They all feel more aware of their core and have integrated better flexibility and posture into their daily lives (Josephwould be so proud!) as well as just a healthier lifestyle—they are proof that once you make one little step towards health, it makes you want to continue it in other areas of your life.
When I asked them about how they have been able to stick to it and remain consistent, they replied there were several reasons.  First, they don’t hate it (always a bonus).  They also like the accountability of not only feeling like the owe it to themselves, but to each other to show up—since they are counting on the other ones to be there (and save money as a triplet).
They told me they were shocked when I asked them to be clients of the month, but once you see them in action, and hear about their dedication and success, you can see immediately why they have earned it! Congratulations ladies!
patrea2012-10-05T19:30:00-04:00