November Client of the Month 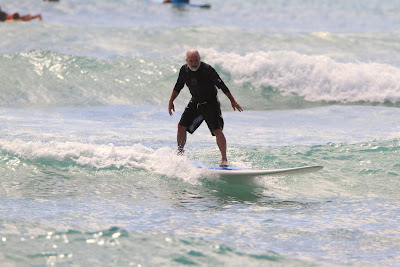 My client of the month for November is Stan!  Stan has been working out with us since March and is extremely dedicated to his exercise program—both here at Indianapolis Pilates by 15 to Fit but also on his own—he also likes to run and lifts weights.  This dedication to his health and he consistency as a client are the things that inspired me to make him this month’s client of the month! I think you will find him an inspiration as well.

Stan is 68 years old and a retired attorney. He was somewhat of a work-a-holic when he was practicing law and had let his health priorities slip a bit.  About 4-5 years ago, his doctor told him if he didn’t start exercising and lose weight, he was going to become diabetic.  Even though he had tried an exercise regimen in the past, he was really motivated this time.  This is when he started running and lifting weights.  However, within the last year, he started developing knee problems when he ran.  He went to see the doctor about his problem and was told he should try yoga.  After talking to his daughter about it, she recommended Pilates because she thought he would like it better than yoga.  He took a couple classes with her while visiting her in Hawaii and enjoyed them. When he got home, he started scouting out places to try it in Indianapolis.
Luckily, he found us doing a web search and even though his plan had been to try several and decide which place he liked best, he ended up finding us and because of the convenient location (lots of parking too) and our friendly staff, he just stayed with us (and his lovely wife has since joined us as well).  He told me he has worked out with nearly all our trainers and has enjoyed working with all of them.  He generally does two classes every week that he is in town.
Stan told me that he really has enjoyed Pilates because he likes things that test him—even though he has been working out now on his own for awhile, he likes the fact that Pilates targets muscles that he doesn’t target in his other workouts.  He also likes that in each new workout (which we change every week or two) there are new exercises to try and new areas that are targeted.  He also really appreciates the fact that because we keep our classes small (usually a maximum of 4 people), each person gets a lot of personalized attention from the trainer.
Stan’s goal when he started exercising was to get in good shape—he was doing what his doctor recommended. He likes that Pilates rounds out his fitness program.  He also has avoided that diabetes possibility that his doctor warned him about and amazingly, he has been able to go off of several other medications he had been taking for blood pressure and high cholesterol.  My favorite part though? He has also been able to improve his surfing and mountain hiking which he enjoys when he visits his daughter in Hawaii.  Pretty impressive huh?
Good work Stan!
patrea2012-11-01T14:00:00-04:00