I can’t believe it is already time for our last client of the month for 2012! Boy how time flies.  But I am proud to announce this month’s client of the month is Brian Carey!  Brian was one of my very first male clients and has been working out with us here at Indianapolis Pilates by 15 to Fit for over 3 years.
Brian has always been interested in working out to keep his body healthy and fit, as well as to control the diabetes he has had for the last 42 years.  He just decided he wanted to try something new and gave Pilates a shot.  In his own words, he “got hooked right away.”  He likes that it is an intense workout, but that he also doesn’t get tired of it because we are constantly changing it up.  He did try Pilates once before at another location, but didn’t like that they weren’t more closely monitoring what he was doing—and since he wasn’t so sure himself on his first try, it didn’t really work out.  He told me he enjoys the fact that at our studio, the classes are small and that there is an instructor who is always keeping an eye on his form.  His advice to new people interested in Pilates? Just give it a couple of sessions and see what you think.  Even though it may be slightly more expensive than larger group classes, he feels like you get what you pay for, and that the value you get at 15 to Fit is exceptional, particularly with all the one on one attention.  Who could ask for a better compliment? 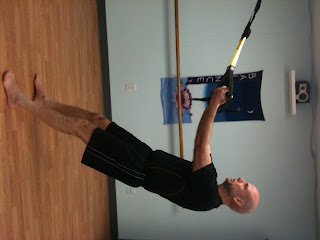 Brian has always dedicated time to exercise and has done a fair amount of cardio and weights—but he feels like Pilates offers a full body workout and this is one of the things that he thinks is the most different about Pilates from other types of exercise (and one of the things he likes the most about it).  He also thinks the workouts are intense—he jokes that sometimes his male friends tease him about doing Pilates, but that he just challenges them to come in and see what it is all about.  He enjoys that the workouts continue to increase in difficulty as your skill level increases, so that you always have new goals to accomplish.  He likes the class he takes weekly because it incorporates the machines (the reformerand the chair) as well as the barreand the TRX equipment.  He tells me he can really feel his coreworking!
Brian told me he didn’t have specific goals when he started with us here besides trying something new, but that he has seen so many benefits from Pilates—for one thing, all his doctors, who closely monitor his health particularly because of his diabetes, have told him that he is in great shape because of all he does.  He also is very physically active in his business (he owns a mobile dry cleaning service called Pressed 4 Time) and feels like not only does he have more energy, and better balance, but loves the fact that when he leans to pick something up, or is bending over, he automatically tucks in his stomach muscles—a habit he credits to his Pilates practice. He also has started incorporating portions of his workouts at the studio into his personal workouts. THOSE are exactly the kinds of things that I LOVE to hear!  Keep up the good work and congratulations Brian!