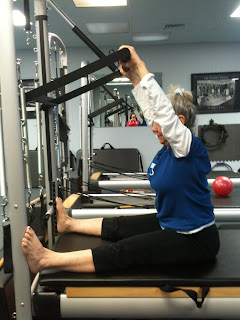 This month I have chosen a great inspirational person for Client of the Month.  Fran has been a client here at 15 to Fit for just under a year.  She was motivated to try it after her daughter kept telling her to try it.  Her daughter just kept telling her how good it would make her feel and eventually Fran decided she should give it a shot. She did a little research and found Indianapolis Pilates by 15 to Fit and was impressed by our training.  She said as soon as she started it, she loved it and has been a regular client ever since.
One of the reasons her daughter wanted Fran to try Pilates is because Fran has suffered from the effects of osteoarthritis for quite awhile (Fran is 69).  It affects her knees, hips, arms and lower back.  In fact, there was one day when Fran came in to the studio walking with a cane because her knee was bothering her so much.  She went through a careful workout with Georgeanna and when she left, she completely forgot her cane.  She forgot because her knee felt so much better.  I love that story because even in just one workout, it shows the power of Pilates.  Fran told me that since she has started Pilates, she can move easier.  She told me she hops up the stairs now instead of dragging herself up them and she loves that she can play with her grandkids without getting tired out so easily.
Fran has tried working out before at other gyms, and doing things like yoga classes elsewhere.  She was never satisfied at the gym because she would just lose interest.  And because she had no support, no one instructing her, she never felt like she was doing a good job. When she went to other yoga classes, she felt like she didn’t know what she was doing and that she was in fact doing it wrong.  She often felt like she couldn’t keep up. She loved starting here at 15 to Fit because as she put it, we “don’t give you a chance to do it wrong” (maybe that should be our new motto).  Our instructors constantly monitor what is going on and whether it is a class or a private (Fran does both) and make corrections throughout sessions. Fran likes that because she learns to do it the right way and is obviously seeing the results.  You should see her biceps!  She has also lost 25 pounds since March with a combination of eating right, doing Pilates and cardio.  She told me she loves that she doesn’t feel like a walking pillow anymore.
Of course I love that Fran told me that one of the other things she really likes about our studio is our instructors. She tells me that she enjoys the fact that our instructors are so friendly, but also really professional and that we always adjust her workout (and everyone’s) to how they are feeling that day.  We certainly do not want anyone to get injured.  Fran says she completely trusts us, and that means a lot.
Fran says Pilates makes her feel strong and empowered and healthy.  Helping people feel that way is one of the reasons I got into fitness in the first place, and that is also one of the (many) reasons Fran is February’s client of the month! Congratulations Fran!
patrea2013-02-01T13:27:00-05:00