I don’t know if Ball State still has this, but back when I was a college student, we had something called, “Watermelon Bust Weekend.” Every college has their big party weekend and Watermelon Bust was ours. The origin of the tradition is lost in the haze of a decades-long ritual of inebriated frenzy, so I never knew what it meant other than a lot of drinking. Essentially, you gather a bunch of 18 to 21 year olds, get them drunk, then give them watermelons, and see what happens. They would lay out these giant pallets of watermelons and you were meant to do relay races with them.  One of those races you carried the watermelon between your knees. Then there was the watermelon toss, so the watermelons would fall to the ground and bust open all over you. You would wrestle watermelons out of people’s hands and end up wrestling in the ground, which was muddy more often than not. Finally, there was a tug of war. It was such a big deal that kids from Indiana University and Purdue came up to Muncie to partake in Watermelon Bust. One year, I went with my friend Phil and his friend Jason, who came up from Indiana University. We pre-gamed and got completely filthy during the day’s events.  My teammates and I entered the tug-of-war, thinking we were so strong that we could beat the field.  Boy, did we learn the hard way right into a pile of mud.  Yes, pound for pound we were strong but just having weight matters in an event like Tug-of-war and my 110 pound or less teammates didn’t qualify.  We were very overconfident, uh…until we weren’t. 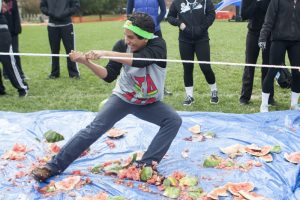