So I was so excited when one of my own clients, Margaret, started hinting around that she was interested in becoming a certified Pilates instructor.  One of the reasons I am so excited about it is because Margaret started training here at Indianapolis Pilates by 15 to Fit just a little over a year ago  and is one of those people who always thought she hated to exercise (I have several clients like that—you know who you are!).  How cool is that that she found us, decided to give Pilates a try, and now wants to train to become an instructor herself because she loves it so much?

Because she was turning 50, Margaret decided she needed to find something to keep her body moving that she actually didn’t hate.  She has told me that she has tried lots of other types of exercise—the usual stuff, running, joining gyms, and just never felt the support and encouragement that she finds working out here.  She also loves the fact that Pilates gives you an all-over entire body (and mind) work out and is a great exercise for everyone, no matter what your body size or type.  It is this passion that has inspired her to want to pay that new found love of exercise forward.  So once she had thought about doing it, she and I chatted and I told her about a great studio in Cincinnati, Body Mind Balance, that trains instructors in Power Pilates.  Anyone can become some sort of Pilates trainer, but Power Pilates is a very thorough training in classic Pilates with innovation and is a place where even I, and several of my other trainers, have continued our Pilates education.  I am excited to say that recently Margaret had her first instructor training session in Power Pilates Beginning Mat and passed!  I couldn’t be more proud.  Even when she had her doubts about it throughout the weekend session, she and I sent text messages back and forth and I reassured her.  I knew she could do it and she did! 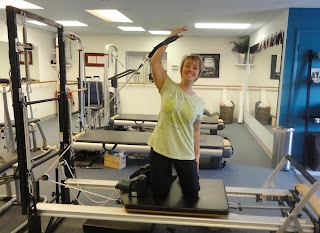 I am also proud to say that she has told me that one of the reasons she has continued with her own personal growth in Pilates is because of how welcoming and friendly she has felt our studio is.  She told me how much she immediately liked it because the instructors are always positive (while still giving correction of course).  She has also become friends with other students, and just feels that the Pilates experience at 15 to Fit is so much more encouraging and helpful than many other exercise atmospheres.  She told me when she belonged to a local gym, they only ever told her what she was doing wrong, and that made her dread going in at all.  Look at her now, wanting to share her newly discovered love of Pilates with others.  She was also excited to see that her training sessions in Cincinnati were also very positive and encouraging —even when she had to take what was basically a written anatomy test!  I told you, this is a serious training program!
Margaret told me that if someone had told her a year ago she would be taking any kind of training class in any form of exercise she would have told them, “you are out of your freakin’ mind!”  So just think, if she can come this far in such a short period of time in her desire to exercise, all you need to do is get in here and take a class or two.  The first step is often the hardest, but once you’re here, you never know, I may just turn you into the next Pilates instructor in Indy!  Check out our online schedule or call us at 317/281-6762.
patrea2011-09-13T15:06:00-04:00